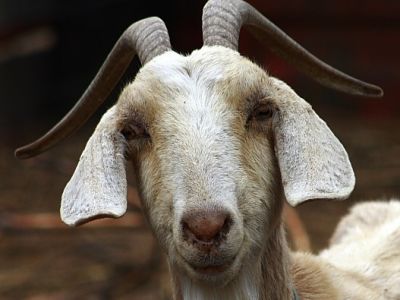 Goats, bottomless holes and railway sleepers
Ed and Ted were out walking in the woods one afternoon when they came across a large hole. Peering in they realised that they could not see the bottom. "I wonder how deep it is?" Ed said.
Ted said: "Drop a stone in and count the seconds before it hits the bottom - that'll be how many feet deep it is." So they look around for a suitable stone and drop it into the hole. Nothing happened. There was no sound at all. Ted said: "Try something bigger."
So Ed looked around and found a large rock and threw that into the hole, but there was still no sound. Ted said: "Try something really big."
Ed looked around and came across a heavy railway sleeper, which he dragged to the hole and dropped it in. Still nothing.
As they craned over the hole there was a furious rustling in the undergrowth behind them. The two men turned in time just to see a goat charging directly towards them. They hit the ground as the goat launched itself over them and disappeared down the hole. "That was close", said Ed.
A little while later, on their way home they met a farmer wandering around the wood. He seemed quite upset and came right up to the two men and asked if either of them had seen a goat that day.
"We have as a matter of fact," said Ted. "We damn near were knocked into the deepest hole I ever saw by a rampaging crazy goat. Lucky for us we got out of the way in time and the goat fell into the hole instead."
"Well that couldn't have been my goat," the farmer said. "I tied mine to a railway sleeper!"

With thanks to 'Stuff Happens!'

There is a similar version of this in the brilliant film 'Hear my voice', only the attached cow just escapes before being dragged down the well!