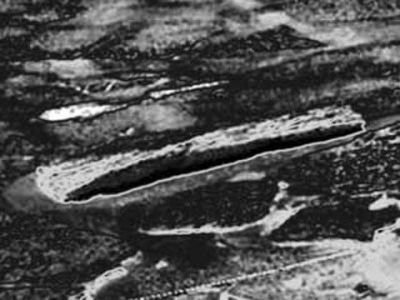 Rupert Sequoia, resident Alien Arbouralist with the Forestry Commission told the media "This is definitely a section of shaped or machined wood that had drifted down the river and been left high and dry. We know wood grows on trees, so obviously Mars once had forests."
Ms. Hazel Beech, chief analyst for Aerial Interpretations, opined to reporters "By referencing the Mars Rover's arm for size comparison we can determine the distance to the timber artefact and its overall size."
"At 2:6 metres it matches the dimensions of the railway sleepers or ties we use here on Earth to mount railroad lines, so hence we consider it a relic of the vanished Trans-Martian Railroad which once served the Cydonia region."