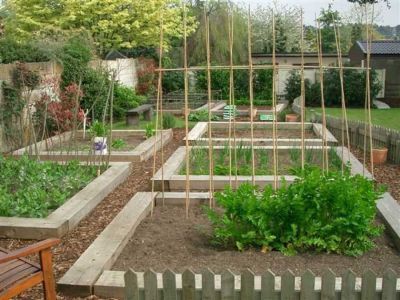 Raised vegetable gardens are the way to go!

Two long term New Zealand residents converted to raised garden beds about five years ago and will never go back to digging in the ground.

''It's been so successful, it's definitely the way to go. Things grow so much faster, it's quite amazing, really,'' Mrs Walshaw says. ''I was picking lettuces in winter - I couldn't believe it. No questions about it, it's far superior.''

With the soil level about half a metre off the ground, the raised beds mean gardening is also physically easier for the retired couple. Anything can be grown in raised beds, which require quality soil in only the top 40cm or so. The base can be clay or any other low nutrient dirt, Mr Walshaw says. ''You just need enough rich soil to turn over. It's not a digging garden, it's a turning garden.'' Raised beds are drier and good irrigation is essential, he says.

Mr Walshaw constructed the 3.5m by 1.5m beds himself. The change from toiling in damp, hard clay-based soil has revolutionised the Walshaw's enthusiasm for vegetable gardening.

Mr and Mrs Walshaw plant early rocket potatoes in September and usually start eating them in mid-November.
This year, pink fir apple is also being planted, which is like a yam or Maori potato. Cabbage, lettuce, cauliflower and broccoli are grown in the raised beds, which also accommodate little cutie pumpkins. ''They just hang over the side. They're perfect for two people, so sweet and tasty.'' Broad beans, carrots, courgettes, celery, silverbeet, parsnips, spring onions and rhubarb grow in the raised beds.

''There's nothing nicer than going out and getting fresh vegetables from your garden, which taste totally different to the ones in the supermarket.''