An epic Scottish chronicle of an immense railway sleeper table 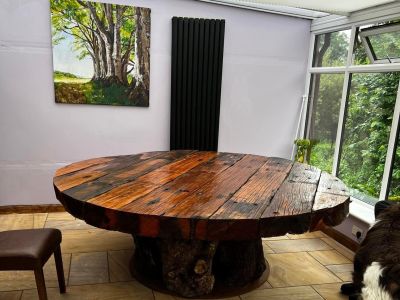 Brilliant photos. There are many unbelievable factors to this stunning table. Firstly, how did Martyn finally move it into position?! The overall weight of one to two tons is jawdropping, and it must be virtually impossible to shift without a team of olympic weightlifters! Many people struggle to lift ONE tropical hardwood railway sleeper, let alone nine! Secondly, the cutting into a circle of such tough tight grained timber is not to be undertaken by the faint hearted. Not to mention the sanding and oiling. No wonder one of his pictures shows his son flat out on the railway sleepers. Either exhausted or a child sacrifice! All in all a massive and impressive undertaking that will comfortably sit 8 people for eternity. Indeed in 500 years, they'll probably construct a futuristic house around it, as they scratch their heads and marvel at the skills (or lunacy) of the early 21st century, whilst singing ballads about the 'Muckle Teeble of Dumfries'!
https://www.railwaysleepers.com/projects/tables-made-from-railway-sleepers/an-epic-scottish-chronicle-of-an-immense-railway-sleeper-table