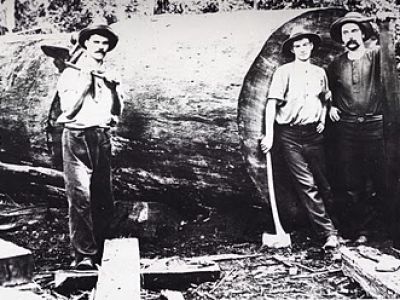 Concrete threatens future of railway sleeper cutters.
With thanks to: ABC NEWS - Reporter, Sean Murphy & Presenter, Anne Kruger.
The national Australian program to replace timber railway sleepers with concrete ones has attracted some controversy. Train drivers operating between Sydney and Melbourne have complained about mud holes affecting sections of the line, forcing them to slow down. Despite this, the railway sleeper replacement program is going full steam ahead, and the Federal Government expects a third of all interstate lines will be converted over the next four years. But what does this mean for the people who source and cut timber railway sleepers? Well, it may not be the end of the line, but it does pose new challenges for a unique industry.

SEAN MURPHY, REPORTER: At Coramba in the hinterland of Coffs Harbour in NSW, Rod Booker is one of the last of the solo railway sleeper cutters. 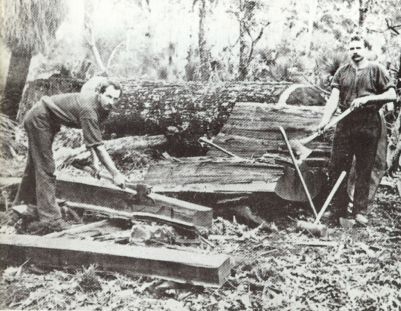 ROB BOOKER, RAILWAY SLEEPER CUTTER: This is an easy job, this one, it's fairly flat. We get areas that are fairly steep to do. Just take it as it comes. It's private property, about 100 acres, probably 40 of it would be bush, probably, I don't know, 20 load that we'll shift, I suppose, from the place.
SEAN MURPHY: Rob Booker is looking for so-called "royal species", hardwood trees that will end up as railway sleepers on railway tracks and bridges around NSW.
ROB BOOKER: Oh, well, you pick a tree and up the size, what you wanna take, yeah, and then you gotta work out where it's gonna fall and then you sorta pick a safe place for it to fall if you can, put your belly cut in and back it off and hopefully it falls where you want it to. Trees are like us: they got a life span. They eventually die and fall down too, same as we do.
SEAN MURPHY: So you're just helping them along.
ROB BOOKER: Yeah, just shorten their life a little bit. And if you take - when you're taking trees out too, it makes room for more trees to come up. Like, a bit of disturbance and you get plenty of regrowth sorta thing, it just helps it along too.??
SEAN MURPHY: Timber railway sleepers are being removed on major lines in Australia as part of a $3 billion program to make rail more competitive. They're being replaced by concrete railway sleepers, which last longer and are less affected by the weather.
DAVID MARCHANT, AUSTRALIAN RAIL TRACK CORPORATION: There's a real need to improve the reliability and the performance of rail between Melbourne, Sydney and Brisbane, and in the course of that we rolled out a concrete railway sleeper program which is aimed to get rid of heat restriction, strengthen the tracks, have less restrictions brought about by maintenance, so that rail can get in the game and be competitive, to help move our goods and services. So now we've actually fully installed concrete railway sleepers in less than four years the line between Melbourne, Sydney and Brisbane.
SEAN MURPHY: How long before you really see a competitive advantage?
DAVID MARCHANT: We're already starting to see movements in the market. We're now in a situation where in the east-west coast, Sydney, Melbourne to Perth and return, rail has now moved to 82 per cent market share against roads. The Deutsche Bank have actually said it's the most competitive intermodal corridor in the world. The Melbourne, Sydney, Brisbane, we're starting to see the market start to creep back, even after the Global Financial Crisis. We've done much better than competitors, both in road and air. They're down 15 or 16 per cent on movements compared to pre-GFC and the last six months we're actually up 5.1 per cent.
SEAN MURPHY: The development of rail in Australia has been a story of nation-building.
JIM LONGWORTH, NSW RAILWAYS: The railways overcame the tyranny of distance. They helped agriculture. The Government gave the communities a railway, the communities used the railway to bring wool and wheat and meat into the cities, into the markets and into the ports for transport overseas. They were considered to be the equivalent of the internet of the 19th Century. So they had the full legislative backing of government, which meant that they were empowered to enter private properties to source timber for bridges, stations, rolling stock and timber railway sleepers as well.
SEAN MURPHY: Jim Longworth is the heritage advisor for NSW Railways. He says there's a rich history to the Australian railway sleeper cutter.

JIM LONGWORTH: They were sole traders, they worked alone in large forests working on very uneven footholds, constant danger of snakes and widow makers falling from trees that were being felled. They'd gather their railway sleepers together, bring them into town, sell them to the railway timber inspector, and then I suspect they spent their money pretty fast in town before heading back out to the forest. There is a trend in railway history to think less about the locomotives and the carriages and more about the sociology of the railway staff. I think there's a wonderful opportunity to learn more about the lives of the getters, of the fettlers who laid them, of the gangers who supervised the fettlers. It's very much an under-researched area in railway history.
SEAN MURPHY: While demand has fallen dramatically, there's still a market for timber railway sleepers to maintain smaller branch lines. Mitch McKenzie and associate Guy Seccam specialise in producing railway sleepers, but they must compete with larger timber mills for a resource that's increasingly locked up in national parks and conservation estates.
MITCH MCKENZIE, TIMBER MILLER: We're getting less and less land to be able to source it on, because a lot of it's getting locked up. Finding the right logs because the railway only want good stuff. They want hard, durable timber, ironbark, tallowwood, kroger, white mahogany, grey box, stuff like that. The other stuff's too soft, it just won't wear on the track. You've got your big mills, they get first crack at it. Little blokes like me, you've just gotta pick around, get bits here and there, wherever you can get them, you know? So you've gotta be - you gotta keep your eye out for them.
SEAN MURPHY: Mitch McKenzie has worked in the timber industry all his adult life. He says the move towards concrete sleepers may be progress, but he has his doubts.
MITCH MCKENZIE: Yeah, I guess it had to come, you know. But I'm not sure - I'm not sure whether concrete railway sleepers will be any more environmentally friendly. I couldn't see how, really. Timber grows back again, so it's a pretty good - I think it's the best. It's a great resource, Australian hardwood. I think we import $4 billion worth of timber a year. We've got it growing in the backyard, you know? So why, I don't know.
SEAN MURPHY: At Glenreagh in the Clarence Valley region of NSW 3,000 people turned up to this year's timber festival to show their support for the industry.
ROD HENSON, TIMBER COMMUNITIES AUSTRALIA: Well, look, things are very positive up here. We've got good regeneration rates and that with our timber, plenty of orders for the better type of timbers, along with the lesser types as well, but, yeah, the Government seemed to see fit to keep purchasing these timbers for their bridges, wharves, decking and that sort of thing. So, it's going very well.
SEAN MURPHY: How concerned is the industry up here with the growing influence of the conservation movement???
ROD HENSON: Well, there is a lotta concern. The Greens seem to have just one thing in mind: lock all the bush up, which I don't believe is the best way to go for the welfare of the bush, and we've got communities that depend on timber and it's the only renewable resource we've got. So, why not keep it alive and kicking?
SEAN MURPHY: When he's not milling sleepers, Mitch McKenzie is a champion axeman, but he's also a conservationist. He reckons most timber workers are. 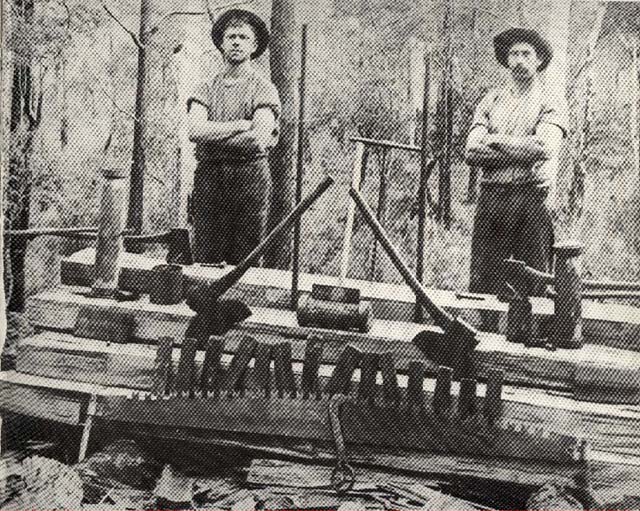 MITCH MCKENZIE: The more people that get around the timber industry and get a feel for it and get around the bush, I think the emotional side of it will go out of it and it'll be a bit of common sense, you know. Because the demand for timber is big. I'm sure people get the wrong idea about it. They think you just cut it down, you know, you don't - not really into it, but, yeah, we're into the bush. There's no point in just letting them grow and fall over and ants eat them or, you know, use 'em, just do it sensibly. That's the trouble now: we're getting into too small an area to source our timber and therefore people get pushed to log it harder.
SEAN MURPHY: And that's a view shared by Rod Booker. As one of the last solo railway sleeper cutters, he's competing against highly mechanised logging companies.
ROB BOOKER: Yeah, the areas, like, they're growing back, but I don't know whether they're growing back as fast as a lot of operations in the bush now. We're taking more timber out than what we used to take, like, smaller size, which makes the time you get to go back into the bush longer between cuts. It's gettin' harder and harder to get areas to do, and it might only get another couple of years work left, I'm not sure.