GEDLING'S HILL OF DEATH. A PARADISE FOR RAILWAY SLEEPERS! 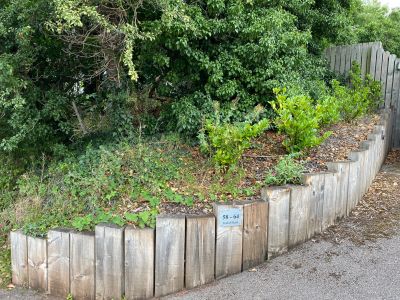 Gedling Borough Council in Nottingham is spectacularly hilly with stunning views of the countryside, and is full of 1000's of houses build with sloping gardens and drives. This inevitably leads to hundreds of retaining walls of which many are built from new and used railway sleepers. It is also home to Freda Avenue, which has been nicknamed 'Death Hill' by cyclists on Strava, and is apparently 25% (although the council optimistically term it 20%) The torturous climb has been achieved by 249 cyclists registered on Strava, (an unbelievable 29 seconds is the fastest time) although there is no record of those who've failed or fallen off!
Digging a trench for vertically placed new railway sleepers can be pretty tough, but clearly not as energetic or demanding as walking or cycling up these hills in Gedling, let alone in the snow and ice. Mind you, it's a driving instructor's dream (or nightmare) for students practicing a hillstart!
https://www.railwaysleepers.com/projects/retaining-walls-with-railway-sleepers/gedlings-hill-of-death-building-retaining-walls-with-new-pine-railway-sleepers