YOU'RE NOT AS STRONG AND YOUNG AS YOU THINK YOU ARE! 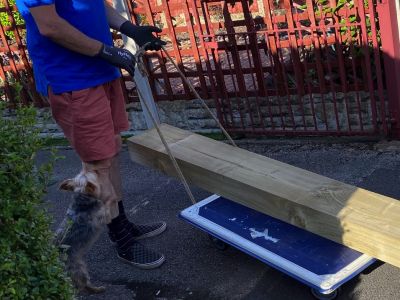 Do not underestimate the task of moving a dozen railway sleepers. Railway sleepers can be really heavy, so it makes sense to lift within your capability and remember to bend your knees and not your back. Spending a week or two in bed with a strained back is agony and such a waste of life.  Avoid your macho tendencies and attempts to beat the 'Carry the railway sleeper' record by the world's strongest man or the 'toss the railway sleeper competition'!  It is unwise to mix railway sleepers and alcohol. By all means bribe people to help you, but it is recommended to serve the drinks and vol au vents afterwards. Carrying the end of a heavy railway sleeper with someone who's been drinking is a recipe for disaster. They'll either drop it on you, or cause you to fall ceremoniously backwards into the herbacious border. Read more..
https://www.railwaysleepers.com/projects/assorted-landscaping-with-railway-sleepers/the-joys-of-lifting-and-moving-railway-sleepers