Alan Titchmarsh & the case of the missing railway sleepers. 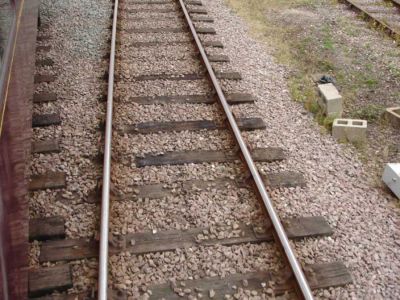 There are new fears over the safety of our railway sleepers & railway lines tonight following the publication of a new report. The report, which is the latest in a long line of such works, states: "For years we have been having trouble with damaged or missing railway sleepers," said Dr Douglas Ramsbottom. "At last we have found an explanation: Alan Titchmarsh." According to Dr Ramsbottom "It was alright when Titchmarsh and his landscapers used old discarded railway sleepers to make their raised beds, but now they've run out they've been taking them off railway lines that are still in use!"

The government has responded to the report with caution. A spokesman for the Transport Department told DeadBrain, "Our railways have always had an excellent safety record and accidents are extremely rare. The pillaging of railway sleepers for use in second-rate garden makeover shows has got to stop before the unthinkable happens and someone gets hurt while travelling on a train!"

Thanks for the tongue in cheek advice from Deadbrain.co.uk.  I guess we should take care if our railway route passes near an allotment ! What looks like a railway worker may be a railway sleeper thief !