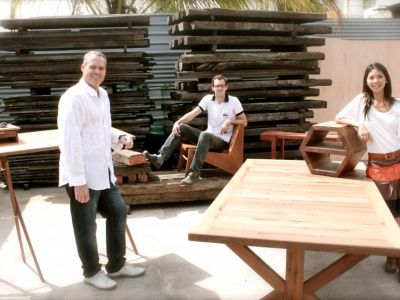 Furniture that has had a previous life is increasingly in demand, as consumers tire of mass production and look for stories and traditions. IMAGINE having a dining table in your house that is brand new but with a long history behind it. Such would describe the latest trend in home furnishing, where old wood turned into new tables and chairs have become conversation pieces.

The wood comes from old train tracks, or rather, railway sleepers. Singapore’s railway line may be gone and its railway sleepers with it, but that hasn’t stopped a new furniture brand from having designs on them. After all, The Rail Life Co was set up to make ‘railway sleeper furniture’ – or, to be precise, furniture made from railway sleeper wood. The brainchild of a Singaporean and an expatriate based here, it uses wood from the Australian Railway and comes in three lines – Hive, Maritime and Rail Way, each with different aesthetics.

Given the uniqueness of its source material, the company doesn’t churn out standard pieces, but wants their furniture to be ‘functional art’, according to principle designer and brand manager Kelly Chan. True to its vision, The Rail Life Co’s collections were launched like an exhibition of sculptural art works at The Substation last weekend. ‘We’re approaching this from an art angle and trying to make unique pieces’, she says.

Given the source of the wood which is likely to be well-aged, dense and medium to hard, and the not-so-predictable supply, The Rail Life Co intends to focus on customised furniture. ‘But priced just above average price points, so that it’s still accessible. This isn’t high-end furniture, and every piece will have a story to it,’ she elaborates. The Rail Life Co intends to catalogue every piece it makes, so that buyers will know where the wood is sourced and so on.
‘The story is important to us so each piece of furniture will come with an engraved plaque explaining which railway it came from and so on, Ms Chan explains.

Using reclaimed railway sleepers from railway lines is not a new concept, but it’s a first for Singapore to have a company which is specialising in it, Ms Chan points out. Only a handful of companies in the world specialise in recycling railway sleeper wood for furniture, and the reason is that it’s challenging to source, and there are a lot of unknowns, she says.
‘Buying railway sleeper wood is like a lucky dip – you don’t know how much can be re-used; as this is timber that many would regard as scrap.’ The Rail Life Co is able to do this because of founder Kevin Hill’s background in construction. He is the CEO of Venturer Pte Ltd which he started 17 years ago in Singapore, and was involved in the Botanic Gardens, the Singapore Zoo and Marina Bay Skypark etc. A chartered builder, he is also Ms Chan’s partner. Ms Chan’s own background is in social services where she worked for the last 10 years. Her last post was with the Health Promotion Board as a public health educator. ‘But I made a big change a couple of years ago, when I started exploring the arts,’ she says, adding that she was also learning how to paint.

The idea for railway sleeper wood inspired pieces came out of Mr Hill’s experience and work with timber. He also has a workshop where the reclaimed railway sleeper wood is reconditioned and worked into furniture. Explaining how the six-seater table was made, for example, Ms Chan describes how the thick piece of wood was cut horizontally, so that only the middle portion was used. The surface of the table was sandblasted to smoothen it. ‘But we kept the original look of the wood for the underside of the table’, she explains, citing it as a nod to the wood’s history.

Ms Chan’s Hive design came about while she was researching Jarrah trees, and found out that the species, which belongs to the Eucalyptus family, is also known for its flowers and honey. The Hive line was derived from the hexagonal shape of beehives. The couple took on a commissioned designer on a permanent basis, Joseph Sayr, who is a shipwright and experienced boat-builder. Sayr moved from New York to Singapore about four months ago when his wife was posted here to work. They met him by chance, and one thing led to another; and soon they had asked him if he was willing to look at furniture design with a nautical theme.

‘We’re also open to working with architects and designers who might want to design using railway sleeper wood’, says Ms Chan. The Rail Life Co wants its products to be characterised by bespoke pieces, with an artistic and also green approach. ‘The name of the company refers to how we’re basically extending the life cycle of these trees that were cut down for the railway sleepers, and now finding another use as furniture – which means it can be used for another 100 years or more’, says Ms Chan