I’m Stuart Murdoch. I was born in Aberdeen twenty something and something and something years ago. My family followed my father and the Scottish Army around the world for a while before settling in and around London. I attended a pre-BA foundation course at art college in Surrey where I learnt how to juggle and how to flip burgers. After a brief spell at the BBC I started myself up as a freelance illustrator and cartoonist before going on to become a corporate graphic designer. 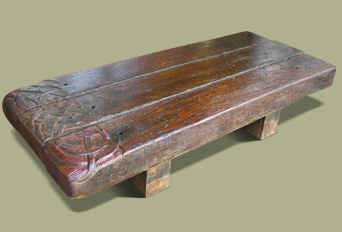 Eventually, the trudgery of corporate design and marketing and the hustle and bustle of the big city became too much for me. I started as a sculptor “part-time” in 2007 but launched the business full-time at the Hampton Court Flower Show in summer 2008, and in early 2009 (in the year of Homecoming Scotland) I took the opportunity to come home to Scotland. I now live and work overlooking the majestic River Spey on the edge of the Cairngorms National Park. My cottage and workshop are situated on the western slopes of Ben Rinnes, an imposing conical hill that dominates Banffshire and the setting is stunning. I draw a great deal of inspiration from the scenery, wildlife and the land around me and heritage and traditions of Scotland.

I am currently working predominantly in stone, slate and wood whether it be small, intricate wood carvings for the home or large wooden or stone sculptures for the garden or even public space.

You have created stunning, magnificent carvings on railway sleepers, forming sculptures and furniture that are simply breathtaking and lift the spirits. Thank you.