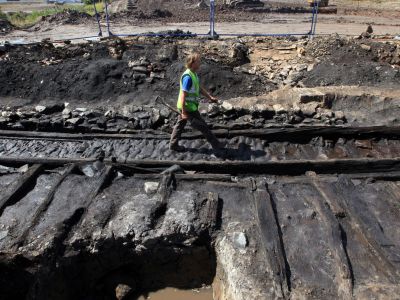 200 year old railway sleepers discovered! A 25m (82ft) stretch of the 1790s’ historic Tyneside wooden railway was unearthed weeks ago by archaeologists at the former Neptune shipyard in Newcastle. The superbly-preserved railway sleepers & track, which carried coal from collieries to the Tyne for shipment, is the earliest and only surviving example of the standard gauge railway which spread across the world. It is to be stored at the Stephenson Railway Museum in North Tyneside.

The section of rails and railway sleepers will be stored in environmentally-controlled conditions at the Stephenson Railway Museum in North Tyneside. Newcastle historian Les Turnbull said: “This is really exciting and I am overjoyed that some of the railway will be preserved.

Archaeologist Richard Carlton said “These wooden railway sleepers were part of a major main line in the late 18th century which probably carried a ‘train’ of horse and coal-filled cart every minute. It would have been a disaster if the railway had been lost. This is the railway which gave the standard gauge to the world and its loss would have been an international tragedy. The railways are the greatest gift the North East has given to the world."