A life for every railway sleeper 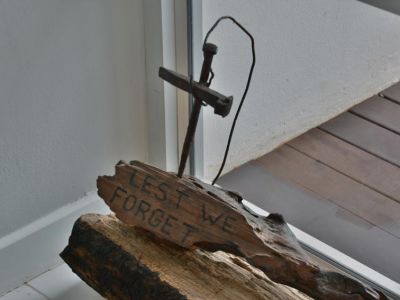 Hundreds of millions of railway sleepers have been laid, and thousands of railways constructed in the last two hundred years, but few have the shocking and appalling history of the Siam - Burma railway. 1942 - 1943. 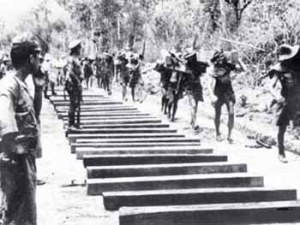 In June 1942, 61000 British, Australian, American, New Zealand, Danish and Dutch POWs as well as an estimated 250000 labourers from Siam, Burma and Malaya were put to work by the Japanese Imperial Army to construct a railway line 415km long to link Kanchanaburi to the Japanese Base Camp in Thanbyuzayat in Burma, thus ensuring a direct line from Singapore through Malaya and Thailand to link up with the railway network in Burma. Apart from supplying their bases in Burma, the Japanese had also planned to use the railway to launch an attack on India.

Originally, the Japanese estimated that it would take 5 to 6 years to finish the line, but under tremendous pressure, the POWs were forced to complete the  in 16 months. The effect was devastating. The railway line was built over the dead bodies of some 16000 allied POWs and 75000 Asian labourers. That means for every railway sleeper laid on the railway track, a life was sacrificed.

Hugh Simpson in his article: 'A life for every sleeper',  writes: "Standing in the main cutting of Hell Fire Pass, I was surrounded by the continuous din of cicada’s and a light breeze that only slightly alleviated the oppressive heat of the day. Hands on hips, sweat beading off my face and into my eyes, I couldn’t believe the sight of the cutting and the great human cost it took to construct. 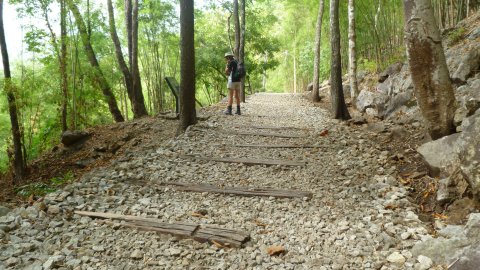 “A life for every sleeper”, is written on the walls at the entrance to the Australian built museum near Konyu Cutting, also known as Hell Fire Pass, which is 80km north of Kanchanaburi. The meaning of those ominous words didn’t sink in until I was standing in the Konyu cutting and reflecting on what these men were asked to achieve. British surveys for a railway to connect Bangkok and Rangoon in Burma had been conducted since the early days of the 20th Century. Japanese occupation of Thailand, and subsequent invasion of Burma, had meant the railway would be the best means of resupply for the Imperial troops in Burma.

Construction had begun by October 1942 with labourers commencing construction from each end of the 415km railway, finally meeting in the middle in a place known as Three Pagodas Pass. A vast majority of the allied POWs used in the construction were captured at the fall of Singapore and the Japanese cared very little whether they lived or died. To the Japanese, the POWs had brought great shame upon their nations and they considered them no longer soldiers. Poor food, tropical diseases, malnutrition and constant beatings by Japanese guards made the life of a POW a living hell. The quality of food given to the POWs was extremely poor and the rice often contained weevils and dirt from the floors of the rice mills. Occasionally meat and vegetables were added, but often it was too full of maggots to be consumed.

The museum is perched on top of a hill within the grounds of an operational Thai Army Base. From the museum’s viewing platform, visitors look to the west over Burmese mountains which represent a serenity the POWs may never have felt, except in death. The platform also looks over the slope to one of the cuttings which is now navigated by an expertly constructed set of stairs.

“On jobs such as cuttings, Nips stood overhead and threw stones all the time irrespective of whether you worked or not.” – Reg Holloway, 2/40th Infantry Battalion, Australian Imperial Force. Once you reach the bottom of the stairs, Reg Holloway’s comments made much more sense. The first minor cutting in the side of the hill has on one side a 10 metre drop down the slope and on the other, the cliff face climbs almost 15 metres high. The Japanese guards would have held a commanding view overlooking the prisoners as they worked.

In early 1943, it became apparent that the railway was not going to be completed as quickly as planned and in April 1943, the Japanese pushed for an August 1943 deadline and the POWs entered the ‘Speedo’ period. POWs worked 12-18 hours days in the heat and humidity of the wet-season where the deadly effects of diseases such as cholera and malaria decimated the POW workforce. “Pick up. Carry twenty-five yards or more. Up the bank. Dump. Walk back…” – Ray Parkin, Dunlop Force, Hintok Mountain Camp, March 1943. 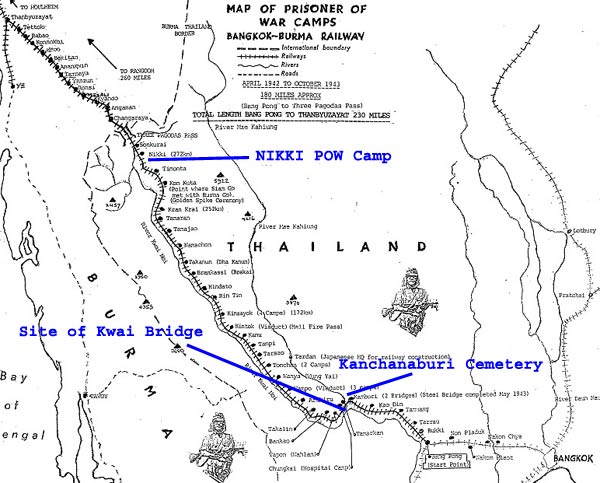 One of the most difficult stretches of the railway line, which claimed many lives, was a wooden viaduct (above) near Nam Tok. It winds round a sheer cliff face by the Kwae Noi river. Another difficult stretch was the infamous Bridge Over the River Kwai. It is an engineering feat which evokes immense human suffering. At Hellfire Pass, trails lead to the Konyu Cutting and the Hintok bridge where POWs undertook hazardous work in precarious conditions. The hard labour, harsh discipline, poor diet, exhaustion and lack of medical care exacted a heavy toll among the prisoners. The cruel treatment meted out to the prisoners is a shameful indictment of the Japanese military. By 1943, some of the men were in an appalling state. In Colonel Toosey's report of October 1945 he wrote:

'On one occasion a party of 60, mostly stretcher cases, were dumped off a train in a paddy field some 2 miles from the Camp in the pouring rain at 0300hrs...... As a typical example, I can remember one man who was so thin that he could be lifted easily in one arm. His hair was growing down his back and was full of maggots; his clothing consisted of a ragged pair of shorts soaked with dysentery excreta; he was lousy and covered with flies all the time. He was so weak that he was unable to lift his head to brush away the flies which were clustered on his eyes and on the sore places of his body. I forced the Japanese Staff to come and look at these parties, which could be smelt for some hundreds of yards, but with the exception of the Camp Comdt, they showed no signs of sympathy, and sometimes merely laughed.'

It was during this period that Konyu Cutting received the name Hell Fire Pass. The old track continues to wind around the side of the hill until you are confronted by a rocky outcrop that has been gutted with 20 metre walls of rock either side. Konyu Cutting, or Hell Fire Pass, still bares the visible scars from its creation with the walls of the cutting littered with broken drill pieces. The railway was finally completed in 1943 and continued to run, with the exception of occasional allied bombing, until June 1945 where the railway was abandoned as the Japanese were slowly beaten back by General MacArthur and his allied forces.

The walk back to the museum is filled with thoughts of the great loss, but also of the courage that these men demonstrated in their struggle. Today, their efforts remain as a visible reminder of the atrocities of war and how their story should never be forgotten. I took one last look out over the valley from the museum’s viewing platform, and as I walked out, lying against the window was a simple POWs memorial. Two railway spikes joined together as a cross, hammered into an old piece of railway sleeper, and three very simple words burned into the wood, “Lest We Forget”.  Indeed, Lest We Forget.

With thanks to Hugh Simpson. 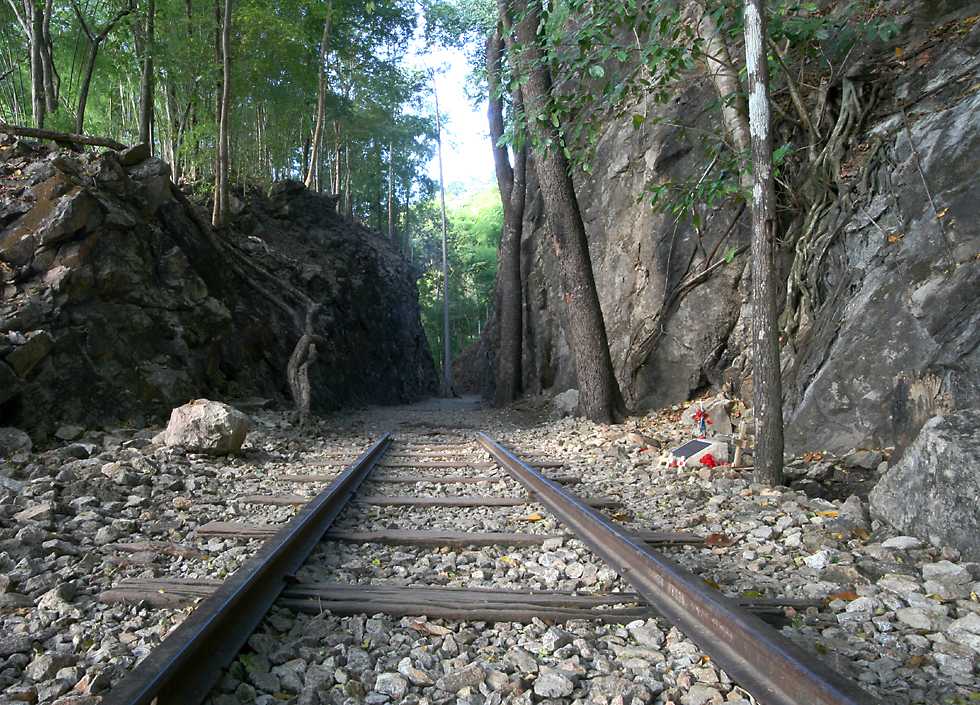